Revealed after 34 years: the identity and full, sad story of "the unknown drummer"

Readers of The Fallen will be aware that one of the Fall’s enduring legends is the mysterious fate of their first drummer. No, not Karl Burns, but the “unknown sticksman” who history has christened Dave - or sometimes Steve - and of whom little is known apart from the fact that he was an insurance salesman and once wrote a song called Landslide Victory, praising Margaret Thatcher. Duing the search for the 50-odd ex-members of the Fall, I shed one or two chinks of light on this mystery, but nothing more. Founding bassist Tony Friel - who remembered him as Steve - suggested that he’d he’d been “ a nice guy, but pretty naff” and “simply had to go” after expressing support for then then Opposition leader.

Another musician, mid-1990s keyboardist Dave Bush - also remembered the unknown drummer as Steve and said he’d known him on the Manchester party circuit in the early Nineties. Although one of the founding members of one of Britain’s most legendary groups, he’d apparently shrugged off enquiries about whether he’d been in the Fall by saying “Yeah, but so was everybody in Manchester.” Sadly, the only other details Bush could provide was that the reluctant drummer had been “a bit weird” - possibly schizophrenic - and had thrown himself underneath a train.

I was shocked and troubled by this. Not just by the unexpectedly dark news and awful nature of “Steve”’s demise.... but the fact that he’d died without recognition. Like the famous Unknown Soldier, he was a legend of the Fall, and posterity didn’t even know his surname.

Then, last week, I received an email out of the blue from Paul Heaton in Manchester. Not - as I thought at first - Paul Heaton of the Beautiful South who has actually been playing with Fallen bassist Steve Trafford until fairly recently. This Paul Heaton was also a musician living in Manchester - he told me he performs as Johnny Angelsnake. Most intriguingly, he claimed to have been a friend of Steve, the unknown drummer, and even provided his surname: Ormrod. Within hours, Paul sent more email, telling me the story, which he has kindly allowed me to reproduce here:-

“I've been reading Mark E. Smith's Renegade book and noticed that he mentioned that The Fall's original drummer was ‘a little bald-headed guy from Stockport’. Now my mate Steve Ormrod used to tell me that he'd been the drummer in The Fall but I never knew whether to believe him or not.

He was schizophrenic, you see, and off his head a lot.

Then I read your [original Guardian] article tracking down the missing members of the Fall, which identifies him as Steve and that he killed himself under a train... it obviously was true.

and was subsequently sectioned. He spent about 18 months in the Edenfield Secure Unit at Prestwich Hospital.

I used to visit him there about once a month. When he came out he couldn't settle anywhere and ended up taking speed again which was a bad thing and hastened his demise. He got married early and his wife left him within a year so that probably contributed too.”

“Steve Ormrod lay on the train tracks in Longsight on Saturday August 20th 1994. It was a sunny morning and he lay his jacket neatly by the track before he did the deed. There was no trace of drink or drugs in his body. He was around 40 when he killed himself.”

Paul aka Johnny Angelsnake also sent a photo of his tragic friend (taken in the doorway of the Old Nag’s Head pub in Edale in the mid-Eighties) - and had another revelation: that he knew Ormrod as a singer-songwriter, not a drummer. Through it all, the writer of Landslide Victory had carried on writing songs and Paul has a tape of his recordings.

Very interesting and sad, but thanks.

Fascinating stuff, thanks for this...

I worked on the Edenfield then. Remember him. Nice guy. Never knew he was in the Fall

Thank the world for Karl Burns stepping in though! - one of my early drumming heroes.

Hope that bugger's ok?
Any gen on his current whereabouts?

Fascinating but of course its also sad story at the same time.

Very bizzare question but I need a headshot of Ormrod for inclusion in a book to be published about rock bands and can't find a single photo of him anywhere....!

I can provide you with a picture of my uncle Steve, if you need it.

Isabel Eeles is a fucking useless TOSSER and a fucking crackpot.

Isabel Eeles SINKS DOWN ON HER KNEES for anyone called Steve. 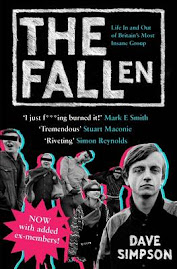